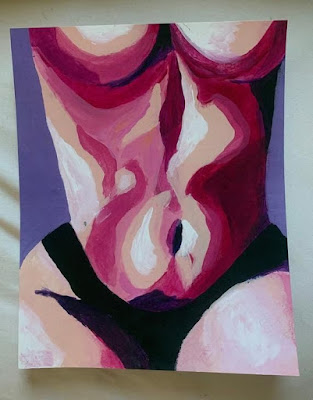 I was 20. He was about 30 or thereabout. It wasn't a real relationship but one kind of entanglement. For someone who has always been a hard girl, I gravitated towards him naturally. He did too. He once told me in a text that I made him let his guards down.

He had invited me over to his apartment. My Uber pulled up and he showed up behind his gate shirtless and in boxer short that revealed him. I wanted to unsee it badly, goodness! I'm a Christian. Having conversations in my head be like 'Come off it baby! Stop looking down! Stop looking at his tattooed chest! STOP!

I tilted my head away from him in shyness. He was a colossal cutie. I might not be good at picking good lovers who meet my needs but I sure do better picking those who meet my fantasized sexuality.

I was just some silly 20-year-old girl enthusiastic about meeting a new man - maybe talk, drink, probably steal a kiss or two then take a ride down to my apartment and expect him to do more chasing afterward. Then a love story? Pause. Is it crack? Bold of me to assume that in a man's house sha. lol

He was the first and only older guy I've ever been with. He probably had everything figured out. It seemed like he had a trajectory, particularly when he showed me a lot of skin earlier. It was intimidating for a girl in a T-shirt and sweatpants.

I remember sitting awkwardly on the couch trying to figure out what conversation befits a 20 vs 30-something-year-old man situation. As I was thinking, he brought me 35% achl booze, I shoved it down my throat to calm and hide my nervousness.

I asked him some questions. Most of it dumb. I could see him holding a straight face when I asked him a particular question, I wanted to disappear. So we switched to playing Ludo. It lasted for a while and took over the silent moments in between our question and answer session.

After a while, he asked me to go change. Man, I thought I was going back home tonight! I didn't bring any extra clothing except for the bumshot jean under my jean for protection, maybe. So he offered me his army green tank top. I thought about 10 ways I could style it until it dawned to me that I would have to fling my bra somewhere and my nipples would be an added highlight of the evening.

He stepped outside the room while I changed into my new outfits. On getting back to the living room, there was already this lowkey music playing in the background. It sounded like one of those songs off a sex playlist. It was actually. We talked for a few minutes and he leaned for a kiss. I could feel my adrenaline pumping hard. I turned my head away from him. I thought I don't have to do this. I can stop right now. I can put my clothes back on and leave. But I didn't. I fxcking kissed him back.

The kiss was so intense and he whispered 'your boobs are beautiful', delicately to my ear.  I had a panic attack and was panting heavily like someone who's been chased by a mob. I remember murmuring 'no, no'

He stopped and I looked away shyly. Then he asked me to look into his eyes. He held me down and told me he wouldn't do anything I don't want him to do. He told me to breathe in for a few seconds and then out. It calmed me so much I didn't want his hands off me. He kissed me again and circled his finger around my nipple. It was hard. He made a comment I didn't hear clearly. I was quiet. His hand started to stride down my stomach. I had a lot going on in my head like 'oh God, is he going down? Yes, he just passed my belly button. He is going down. Breathe baby. Breath.  It's on my clit. Okay, that's not so bad. Maybe another minute. 'You're wet' he said sweetly. He kept rubbing my clit gently with his finger. I was like wow! It's getting better. And his hand inside me, it felt so good. Then I started to moan when he started to make the gear shifts with his fingers and oh Lord, that was so intense oh HOLY SHIT, I fuvking started screaming his name. It was a stronger wave of pleasure, so sharp - my body was freaking exploding, and boom! I was moaning heavily and couldn't put myself together as my legs were shaking uncontrollably. I came multiple times all over the couch. I remember him showing me how wet the couch was, I blatantly told him all those fluid didn't come out of me. He smiled at my naiveness while I laid my tired body to rest and got ready for another irresistible ride.