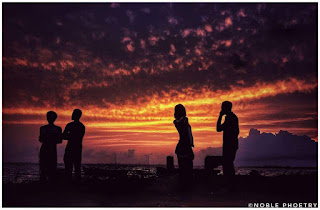 I remember some months back, I ran into a guy I knew from a club in school. He didn’t seem to recognise me though, so I did a formal introduction. This is basically me. If I know you from somewhere and I’m very sure of your face and name, I’ll walk up to you and say hello.
The next day, he buzz me up on Whatsapp. We got along pretty well online and he asked for us to hang out. Certain things happened that didn’t allow us to meet that night. It started from me boarding the wrong bus and I got to where we were supposed to meet late. I had called him earlier before then to explain things. I guess he was in a rush to end the call. He only asked of where I was.
At last, when I got to the place his phone was off. I tried reaching him for about an hour. Not reachable. It was so disappointing.
Luckily for me, I met an old friend and we hung out instead. We talked so many things and ate suya with chocolate. It was yummy and we coined the pet name ‘my chocolate suya’.
Later on, he apologized to me and gave a reason why his phone went off.
I wasn’t even angry. My night was made without him.
So, he asked for another hang out. Seeing him again wasn’t my priority because I had other things to attend to in school. He actually went for a party so he was two hours late. He blamed it on the traffic. I didn’t even complain. My expectations that day was to have a sane evening with someone, just to talk about random things. He talked more about himself and I listened to all he had to say. He started to bore me at a point. I can remember myself yawning so many times. I knew he wasn’t interested in me because the evening was literally about him.
Since there was nothing more he had to say to me, he started getting touchy, and we kissed. That wasn’t a big deal at first. Soon, I realised he wanted to go far and I had to stop him.
So he walked me back to the hostel where I spent the night and kissed him good night and told him I could kiss him all night if the time wasn’t 11:59pm. The goodnight kiss was a sarcasm. I knew immediately after then that I wasn’t going to let him get close to me. I remembered who I was and the game changed. I hated the fact that he made me feel like a filler, like a dumping ground for his previously summed up sexual and romantic urges.
I told him through text, that I wasn’t interested in seeing him again. He was shocked though. I knew the next time we were gonna see, it would be a hook up. It would be him bringing up some sexual advances and I wasn’t even interested in shitty stuffs like that.
My innocent self only wanted to get to know him because part of him reflects who I want to be. He had this kind of vibe I honestly admire and wanted to be his friend. That’s all. No mixed feeling. No emotional attachment. He wasn’t even my crush.
So he ended up screwing the whole thing up.
Hanging out is just to meet, talk and spending quality time to get to know each other.
Most times, I seldom hang out because most guys brain is in their penis. They are always in the hit and run mode.
But a sincere hangout exists.
Hooking up is a whole different game. A one night stand. You spend the sunset together,make out and by sunrise he’s gone. So, during hook ups, guys act like they are really into you. There’s a probability that you might mistake their temporary feeling for a kind of commitment you’ve been looking forward to all your life and fall for it. You spend the night together and he’s gone. He’ll stop calling and texting you because you never really mattered to him.
But I know that every man isn’t qualified to love you, touch you or date you. Reserve your heart for the gentleman who wants a lifetime commitment not a rental moment.
You deserve a man who will invest in you rather than a boy who will never consider you for anything more than a filler.
Thanks for reading through.
With Love,
Toke.
You like my write up?
Tell me on
IG: toke_suave
Twitter : toke_suave
Facebook : Toke Suave Blog
Gracias

My First Bra Story
Dealing With Insecurity in A Relationship Let Go of The Girlfriend Mindset